On-site to cover the collaboration between Living Stones and Creator’s Camp (another article featured in this edition, see A Crucible Moment), our editors took a moment (or ten) to recognize a true Tallahassee treasure—The Meek-Eaton Southeastern Regional Black Archives and Research Center, better known as the Black Archives—at FAMU. If you have never had the opportunity to explore either of the facilities that function as the Black Archives, they are enduring monuments to black and African American history in America, and the diversity of culture on the African continent. The depth of quality and quantity of artifacts is staggering, and both historic buildings contain permanent and rotating exhibits to showcase our history laid bare and give context to the experiences of others. We toured the Black Archives with Dr. Nashid Madyun, Director of the Museum, to view the current collections on display.

“The Archives was originally the Carnegie Library, and Dr. James Eaton had the vision of not only collecting memorabilia but presenting it to the students and the public in the early ‘70s. By the fall of 1976, he was able to pull all these different plans and some of the artifacts that he was collecting together to present it into this historic building that we walk through today.

In the early 2000s, there was an effort to expand the building because of all the items Dr. Eaton was collecting. It was remarkable. African art, film, posters, the Jim Crow and slavery to freedom memorabilia, the music history— there was no way to present that history properly in the original historic building. There was also a need to expand in order provide better access to the archives—the paper documents that they had collected. To facilitate that, Congresswoman Carrie Meeks was able to help obtain funding from the federal government for an expansion so we could combine the two. On the third floor, we now have an actual functioning archive where students and guests from around the can come to do research.

We also have our Union Bank facility that’s on 219 Apalachee Parkway. It is the oldest standing bank in Florida. During the renovation in the early 2000s, the Union Bank was made available as an exhibit space. The Union Bank may be a new addition, but it still goes back to all the work that the university did. They were able to garner that space and now we’re making good use of it. In March of this year we pulled the history elements out and opened it as an African American art gallery. This will allow us to bring some major shows from the east coast and all around the country here for free public viewing. The first exhibit, Marina Brown, is up now. She’s a writer for the Tallahassee Democrat and she has a remarkable story. Her art is African American art but from a different culture—she is a white person that has a passion and acute attention to detail for African American life.

It’s a way in this time to help bridge the culture. For quite some time, whites and blacks have been able to listen to each others’ music and find some synergy, art can do that too. In reality, history can sometimes be more painful. It should be shared but those cultural elements can help to bridge gaps more easily.”

THE COLLECTION, EXHIBITS AND ARTIFACTS:

“The exhibits address all genres of African American culture, from science, music, art, and general history and religion, and we welcome groups and provide free tours.

During the ‘70s and ‘80s Dr. James Eaton had a bus. He traveled throughout Georgia and Florida and collected items from families. That’s one way the collection was sourced. A lot of FAMU alumni understand what we do and the value of preservation so they donate items as well. Universities have the ability to purchase some artifacts, but that is a very small part of how this happens. A lot of this comes from families that donate or we come across a collection and actively seek to have it donated. Both FSU and FAMU have participated in archaeological digs but we, as the research center, have not. We certainly would not be opposed to entering into those types of activities, but I do want to explore more original research activities and publications. There are more things on the horizon that we have not been yet able to explore.

In addition to the collections of James Eaton, we also acquired a massive collection in partnership with the Montague Collection. More than 8,000 items that we have in the archives span a variety of genres—fine art, history, education dating back to the turn of the century, and rare books signed Phillis Wheatley and W.E.B. Du Bois, and we are going to start to rotate elements of that collection in that room there. Guests will be able to see changes throughout the year. The exhibit across the hall is of the Lincoln Motion Picture Company. They were the first African American film company and were founded in 1917. Started in response to Birth of a Nation, it was originally a silent film company and turned 100 years old this year.

The collection is huge. It’s outstanding. We have sports influence, medical history influence, powerful and controversial items from the Jim Crow and segregation period (including cultural elements that helped to keep white and African Americans separate or psychologically in fear) and prime artifacts like Harriet Tubman’s saber and the guns that she used.

One room has church elements here and there, pews from Bethel Baptist church, stained glass, and a pulpit from Bethel AME. These tell of a time when African Americans were unable to meet openly, so the church also acted as a schoolhouse. The Coptic crosses on the wall are from Ethiopia and demonstrate the longevity of Christianity and African history. The first [state supported] Christian community began in Ethiopia, and has been in the region for a very long time. Logistically, Christianity came from the Middle East and passed through northern Africa on its way to Europe. Christianity, Islam and Judaism are sister religions with direct lineage to Judaism.

There is a lot to be learned from each. If you are the type of person who can sit down and appreciate different religions and different culture, and gain from it, then you are the type of person who can share and contribute to your community and society. That’s why these galleries are so important. They are in such contrast to each other because that helps people to see the dynamic in our culture. There are differences in our culture and we need to be able to see them, appreciate them and share them. The differences are what define us. The items in the collections are reflections of where people were and what they dealt with. We should be observant of the lessons of history, but not let it force us to take different sides on arguments.

These blue walls here are empty. We had a fine art exhibit and will start to rotate through the year. Any given part of the year you will have your permanent exhibits, then you will also have the special exhibits coming from the archives, and that’s a critical state of Black Archives today. We need to find a way to make the documents and material culture come alive, and change it to illuminate some of those stories.” 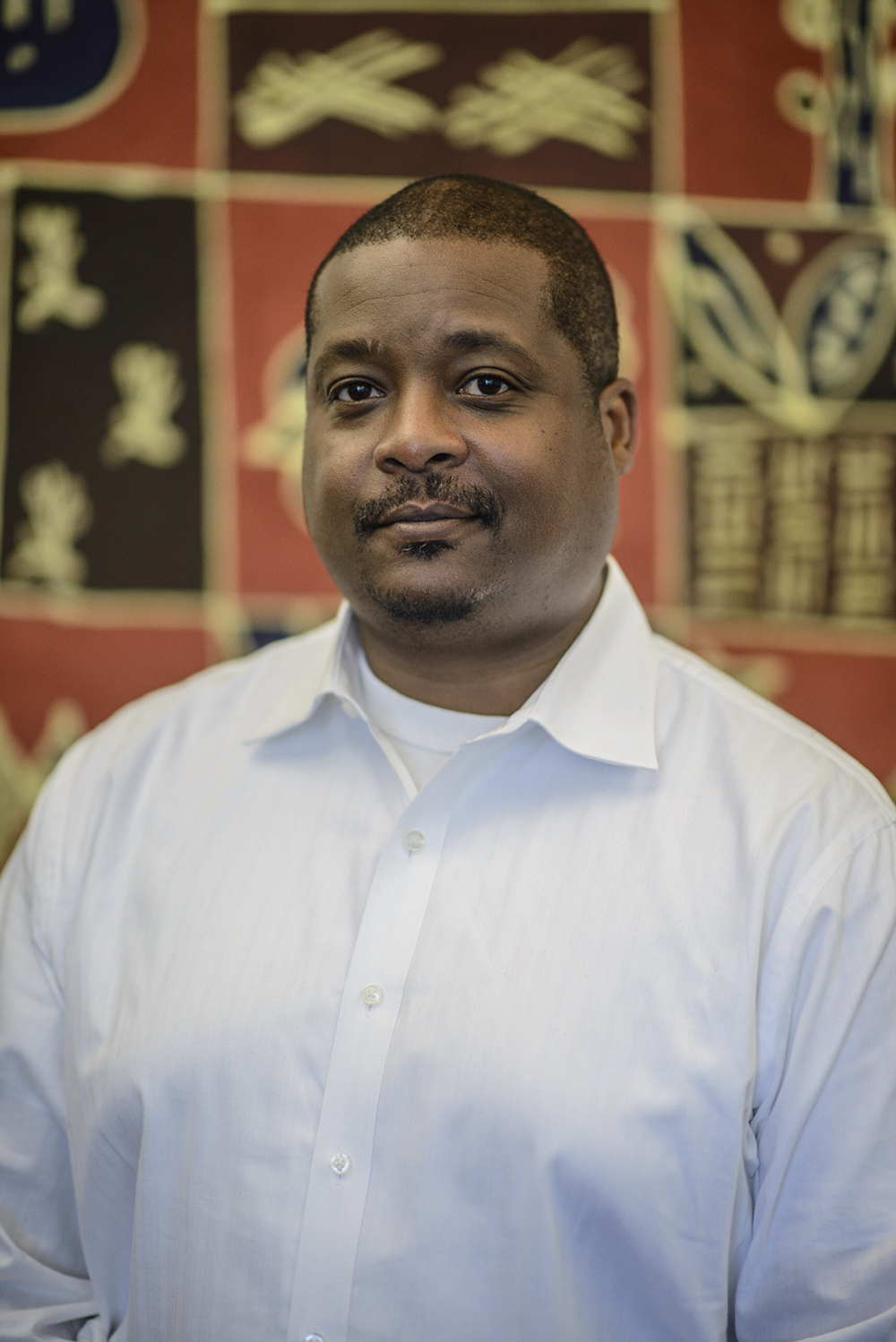 “I am not from Tallahassee. My first day was November 2nd, 2015. I have been in the museum field for two decades and I came here fascinated by the fact that you have an archive, a research center, and this remarkable museum. There is a lot that can happen here and we have a lot to build upon from all the work that was done previously. Not only do you have a cultural diversity, there is a professional diversity at the city, state and universities. You have those different education levels, different economic levels and then you have that cultural diversity. Tallahassee is a good snapshot of America.

I would say my favorite piece would be the Harriet Tubman gun. The fact of what she tried to do and her struggles to get people to freedom—to have her gun and her saber flow through these generations and end up in with her descendants’ family—it kind of bookends that story of slavery to freedom. This family of educators and of physicians is still helping people when that was what she was trying to do in the first place. And to have that gun and saber still be available for public viewing is symbolic of fortitude. History is here. We don’t have to go far.

I have an affinity for visual culture as well. We have a good collection, and I am trying to find a way to get that out. The African art is always astounding to me because of what it means. We look at African art because it is beautiful and because of the craftsmanship, but the culture from which it came is symbolic, religious and spiritual and it has a lot of meaning. So, those are the stories we should tell as well.”

“We’re open on Saturdays and get a good amount of traffic. It’s free and open to the public. People from out of town come here and we do need to get more adults coming through. School groups come through regularly, so they are very familiar with the archives. But it’s a good conversation piece. We are a university supported state entity so these are tax dollars at work for people to come and enjoy Saturday or during the week. Tour guides are available for groups of 10 or more. Call our front desk and give two weeks’ notice to make sure we have a tour guide available, but there is no charge.

I’ve worked for university museums in the past and sometimes the perception is that it is just for people who are on campus: the students. Sometimes you have the trained professors and the state funding available to erect these facilities and they are going to be on campus, and then the general public sees that as a campus entity. The archives are free, state supported, and open to the public.

And maybe sometimes the parking during the week is an issue, and that’s why we put those two spaces out there, so that at least people during the week can park. But on weekends those gates come up and you can park without a problem. Coming on a Saturday is a good idea.”

Look forward to future contributions from the Black Archives in TFM. Admission to both the Union Bank and Carnegie Library facilities is free. Museum hours are Monday through Friday from 10:00am to 5:00pm and Saturdays from 12:00pm to 4:00pm (closed on holidays and holiday weekends). You can also call the office directly at (850) 599-3020 to arrange a free tour guide for groups of 10 or more.