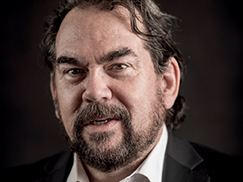 My sister was a member of the organization Students for a Democratic Society and an avid participant in anti-war marches in the ‘60s. My father never understood her anger. My father was an officer in the United States Army who left at home his new bride, my mother, to spend nearly two years serving in the Pacific during World War II. My sister never understood his devotion.

I spent most of my youth trying to help them get along thinking that somehow I could fix their relationship so that we could finally be a happy family. It was stressful and painful for everyone involved. What I didn’t realize was that they didn’t want it fixed. They chose to live that way. Their relationship was what some family therapists would call “conflict-habituated.” Oddly enough, it was their mutual distrust and conflict that actually kept them connected. Like two people who are handcuffed together, they were forced to endure one another, but not devoted to one another’s success and well-being.

Maybe it was their fear of letting go of past hurts, or maybe it was their determination to defend themselves from the outside world, but in any case, their unwillingness to open up to one another kept them from building a relationship based upon their shared interests in art, nature, theater and literature, and above all, mutual respect. They focused upon the matters that divided them rather than the heart of the matter, namely that they were both members of the same family.

Relationships of this kind are limited and limiting. The people trapped inside of them remain more bound than bonded to one another. Sadly, they experience little freedom and flexibility in life. They don’t tolerate differences in others very easily nor accommodate changes in their circumstances very well. They don’t live as freely and openly. They don’t share with one another the joy of discovery and the challenge of considering new ideas. While they yearn for a more joyful life, they seem powerless to live it. If this way of living seems self-defeating, and somewhat irrational, it is.

These days, while we witness this kind of irrational rancor between opposing parties on a national scale, I am reminded of my family history. In a manner that seems all too familiar, people in various groups of various persuasions remain in conflict with one another without any apparent willingness to work through these conflicts in the context of mutual respect. They find it necessary to defend their position and attack their opposing party rather than seeking a common good. And, like my father and sister, I suspect they would rather settle for a tethered, limited existence of habitual conflict rather than risking the uncertainty of compromise. The cycle of insults and counter punches drives their mutual dislike and distrust and only serves to separate them further while those most vulnerable and dependent among us are left wondering if their needs will ever be attended. Indeed, it is stressful and painful for all of us.

Yet, the truth remains: each of us can choose to live differently. In all of our dealings with one another, we can seek common ground. We can affirm the things we share and not be focused on our differences, exclusively. In my life, the experience of God’s love often has moved me past my emotional reactions to seek out ways to understand and even bond with those who don’t share my beliefs. Remarkably, that same love has empowered me to care more about the other person’s best interests rather than focusing on protecting and defending my own. I have learned to listen more carefully. I have learned to value people over principles more often. Most of all, I am encouraged every day to stay focused upon what I know to be the heart of the matter.

Are We There Yet?