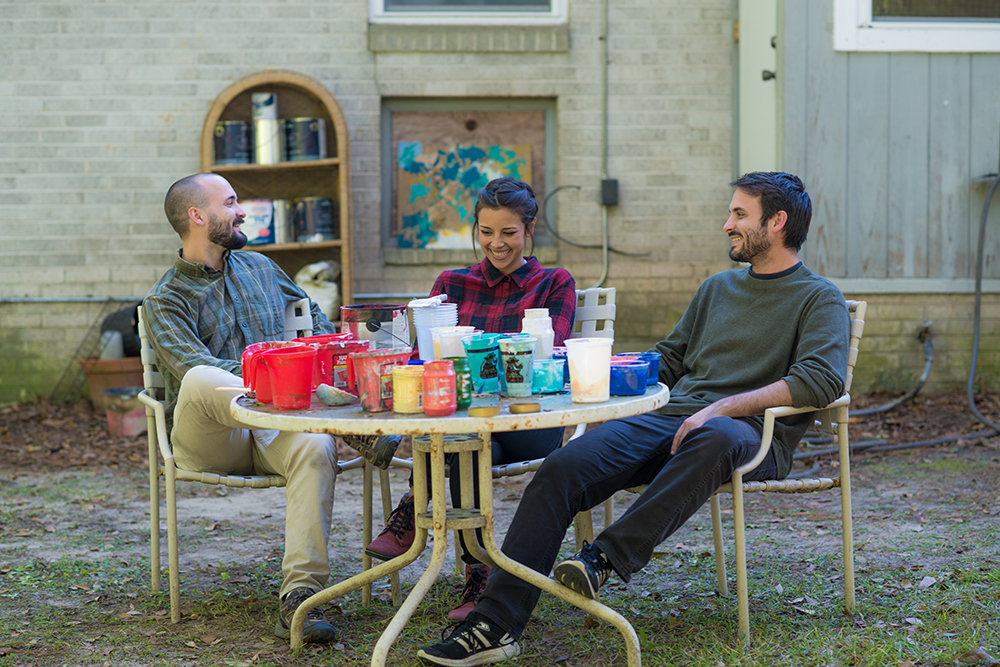 Making a living off one’s art and music is toilsome, and the path to where the collective is now was hardly a straight line. Wavering beginnings taught each member to understand that their best work comes from embracing the artistic process, not trying to control it.

Alex Koenig leaned into earshot of the conversation. Patrons at Warhorse Whiskey Bar on West Gaines Street were discussing the Sin City-like storyboard painted across the bar’s lengthiest brick wall. The “dying dragon” one stranger claimed to identify within the partitioned mural made the artist smile. He didn’t interrupt to explain that the graphic display contains no such creature.

A similar thing happened to Peter Koenig, Alex’s twin brother. While at The Wilbury, about a block up the road from Warhorse, he heard passers-by deduce that the feisty gremlins careening out of a tornado along the building’s westward wall represent the Dakota Access Pipeline. According to Peter, who resourcefully brandished a broom to create each golden whirl of the vortex, the impetus for this piece wasn’t environmental controversy.

Peter and Alex aren’t concerned with what their artwork means to viewers; it’s more than enough to have people look. Michelle Medrano agrees. She’s curious but not controlled by what spectators think when they pause to observe the serene face adjacent ominous shark of her “Ripples” mural outside Burrito Border.

Sometimes, art is more meaningful when viewers are free to determine the meaning. Sometimes, art doesn’t even have a meaning; it’s simply noticeable. This could be a credo for Alex, Peter, and Michelle—the terribly cool artistic trio known as BAET Collective.

Pronounced BAY-it, the acronym came about much like their murals: mildly predetermined and wholly dictated by the process. Originally, BAET was the name of Peter and Alex’s band—oh yeah, they make music too—and the letters B-A-E-T represented character names from the film The Good, the Bad and the Ugly. Then Peter created a band poster featuring a massive tiger with bees flying from its mouth. The brothers ascribed the poster to the acronym and assembled a new name for their band: Bees and Enormous Tigers. As Alex says, the art aligned with the music, and BAET Collective was born.

The plan was fuzzy prior to becoming an LLC in 2015, but the group’s experimental vibe—coupled with unquestionable talent—has resulted in steady work. As freelancer artists, BAET has affixed their talents across outdoor walls, inside eateries, within drink menus, and atop pizza boxes throughout Tallahassee. As a progressive rock band, Bees and Enormous Tigers has toured as far north as Tennessee and lit up local venues like Krewe De Gras and Club Downunder. Michelle has been an equal member of most art projects for well over a year and recently joined the band as a back-up vocalist. BAET Collective now stands as an umbrella for all creative endeavors of these three artists. 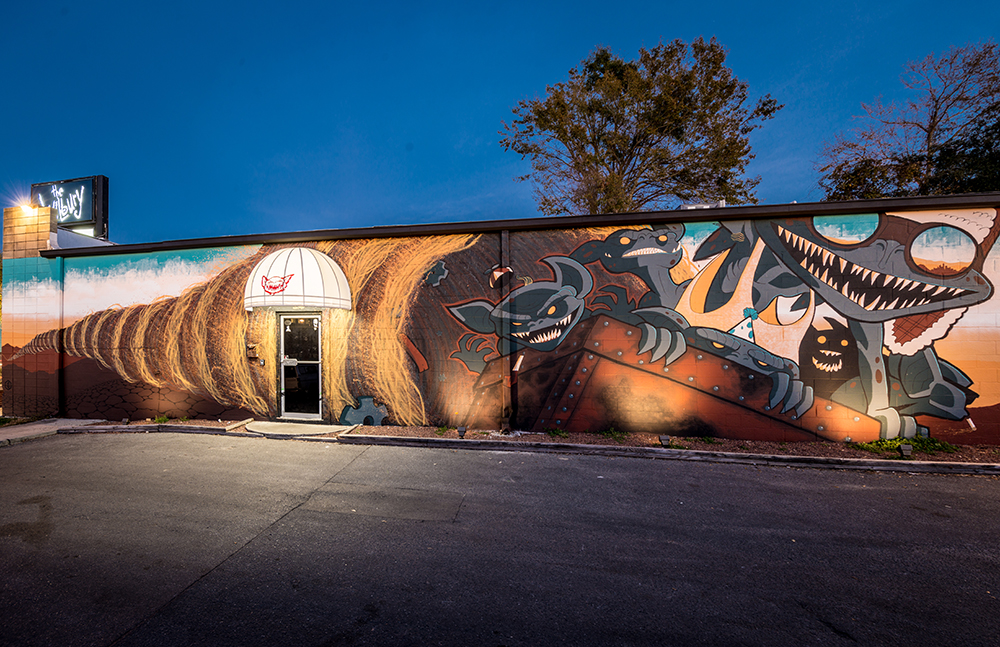 Making a living off one’s art and music is toilsome, and the path to where the collective is now was hardly a straight line. Wavering beginnings taught each member to understand that their best work comes from embracing the artistic process, not trying to control it.

Peter and Alex grew up in Tallahassee, devouring comic books and figuratively cutting their teeth on brass instruments at Maclay School. They started a punk rock band, which waxed and waned over the years. Alex played drums and Peter—guitar and lead vocals. Both studied studio art in college but made the band their primary focus post-graduation.

Michelle was born in California but raised in the Florida Keys. She came to FSU for fashion design, only to learn the program was cut during her first semester. She bounced around between majors, eventually choosing studio art. Upon receiving her degree, she felt exhausted by the art world and didn’t start drawing again until she met Alex.

The brothers also recall feeling burned out and disillusioned by art during their college years. Creative fatigue intertwined with a surrounding culture that, at the time, did not openly crave what they had to offer. After short reprieves however, each brother put pencil to paper again. Coincidently, parts of Tallahassee seemed to be stretching towards a bolder form of expression.

That was around the time business partners Jeremy Matlow and Ryan Smith put out a call on Facebook. They were looking for local artists to paint a mural at their pizza joint Midtown Pies. With only a few band posters in their portfolio, Peter and Alex scored the job. Thereafter, Jeremy and Ryan hired the brothers to create artwork for sister restaurants Northside Pies and the relocated Gaines Street Pies. Warhorse Whiskey Bar and The Wilbury followed, and other gigs have trickled in via word-of-mouth.

The group feels they owe much of their success to Jeremy and Ryan, not only for commissioning numerous projects but also for providing BAET Collective a space to grow publically as artists. Other business owners have followed suit, entrusting Michelle with the logo and inner walls of Izzy Pub & Sushi and the curb appeal of El Cocinero. Most recently, the trio had free reign over a massive piece of edifice, known as GVO (Good Vibes Only), and arranged shoulder-to-shoulder displays showcasing their personal styles. 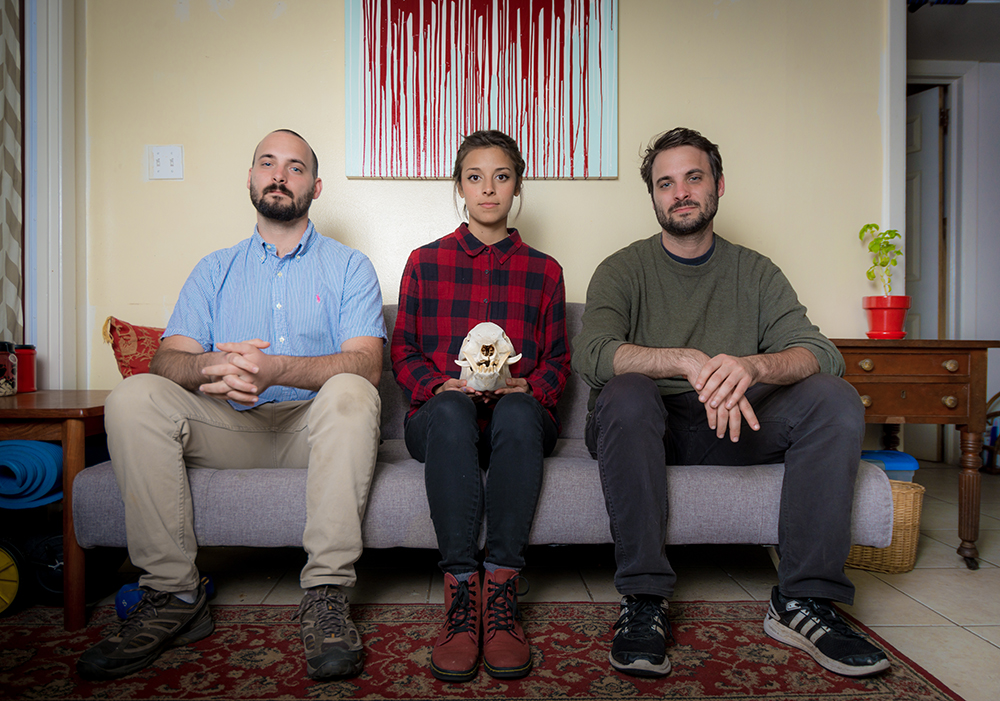 As for their music journey, Bees and Enormous Tigers has seen more evolution than a tweaked band name. The group is currently rebranding, writing new songs, and relishing a sound that’s widely experimental. They had an EP but, “We made it disappear,” laughs Alex. The compilation was recorded a while ago, and by its release, the band felt they had already moved past it. “We didn’t know what we were doing,” says Peter. “Now we have a better idea of the process, and with that knowledge, it’s been easier to get the results we want.”

With support from Tallahassee-based, independent variety label Cat Family Records, the refurbished band released a new single, available on Spotify and Band Camp, in fall of last year. The label touts them as “indie heart meets buzz-saw hardcore.” Much like their art, BAET’s music is exploratory and song-writing methods are akin to creating murals. It’s a stream-of-consciousness approach, allowing emotions and inspirations to guide them, rather than parameters and plans.

The freedom to be authentic and avant-garde is what matters to Alex, Peter, and Michelle, for it’s within this freedom that they do their best work.

While the band toured the Southeast, Atlanta served as a robust example for what BAET Collective desires. In the heart of the South sits this metropolis of culture where the music and art scenes coalesce; where creatives aren’t afraid to push boundaries on a massive scale; where unconventional artists like R. Land can make weird stuff and garner success. Tallahassee is a far less brazen capital, but among the vibrant spaces of Gaines Street and assorted happenings in Midtown, BAET Collective feels free.

The future for these unrestricted artists is vast. For now, they’re using downtime to turn inward, each working alone to generate a series or two in hopes of better establishing their individual work. Michelle leads the way on this enterprise, having already produced and sold prints from an original series. Alongside personal ventures, the collective’s expressive style continues to coat local buildings under a simple, guiding principle: “If it looks cool, that’s it.”