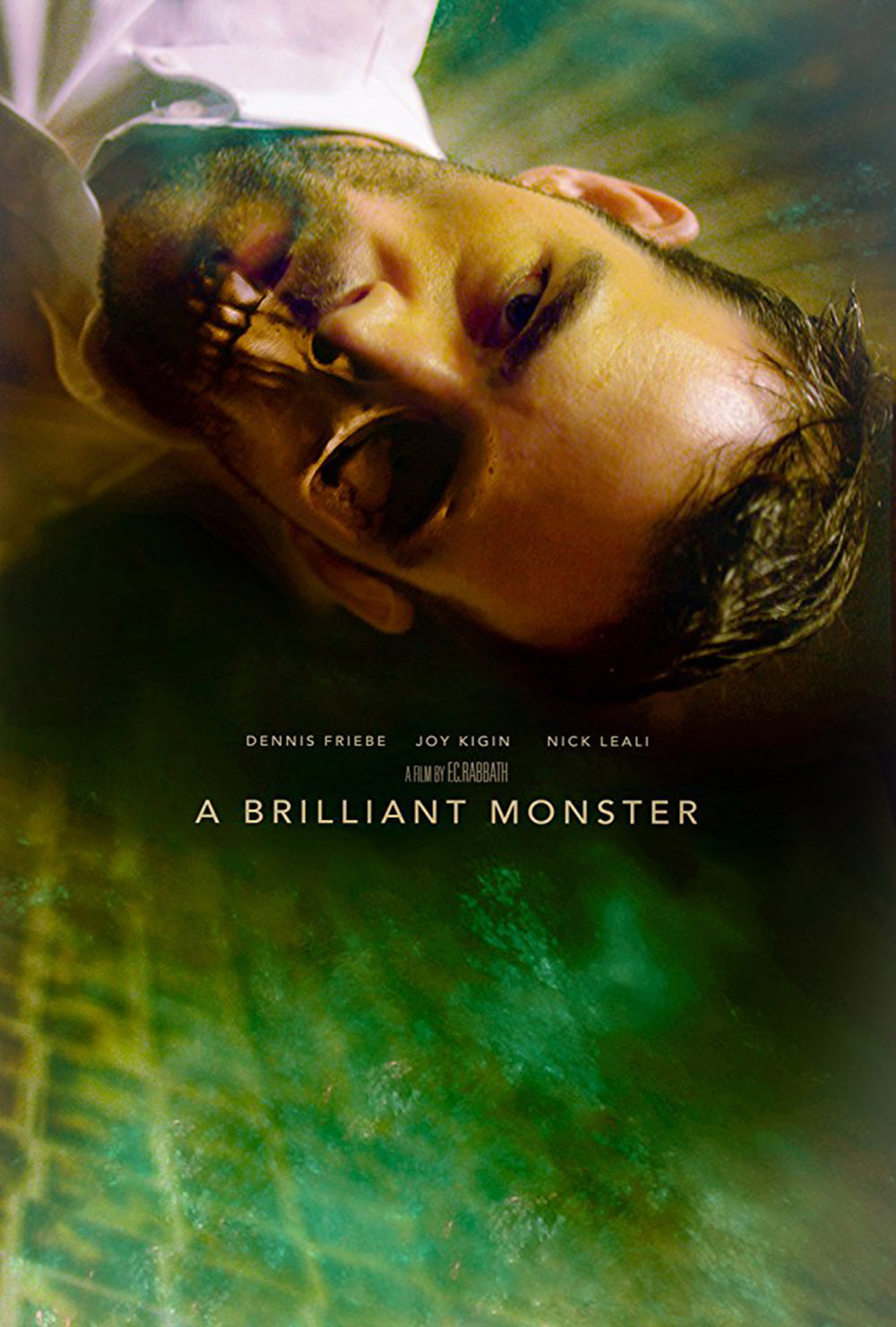 F. C. Rabbath has made a name for himself through his ability to generate suspense out of five-minute films about clichéd strolls through the woods or half-hour commentaries about peoples’ reliance on technology. Like watching a time-lapse of a germinating bean stalk, going through the man’s filmography shows a filmmaker steadily becoming more comfortable making a statement with the stories he tells. Rabbath has always had a way with editing, sound-mixing, and music that carried along some of his earlier works, but with experience (and some higher-quality recording devices) came films with which viewers could relate.  All the while, Rabbath’s stories have become bigger and bolder as he’s become more comfortable transposing his mind to the big screen.

Being his latest work, A Brilliant Monster represents Rabbath’s most ambitious story to date: a nationally-renowned self-help author becomes the primary suspect of a series of murders, with the case being led by a young woman who is beyond eager to send the man behind bars.  This is to say that his first feature-length film, A Brilliant Monster came with heightened expectations.

A friend of mine who also watched the film likened it to Frank Oz’s 1986 film Little Shop of Horrors without singing, a comparison with which I tentatively agree.  Both films tell the tale of a man working for an unforgiving business (Seymour is a flower shop assistant, while Mitch is a writer) who happen upon an opportunity which could grant them success beyond their wildest dreams but only at the cost of their humanity.  The primary difference is that we get to see Seymour’s development from a shy spectator in his own life to an active participant willing to go out and attain what he yearns for, making mistakes along the way which makes his character feel more organic.  If we get to see Seymour transition from bashful to bold – with a realization of the consequences of his actions at the film’s climax – we join Mitch at the “bold” point in his arc and see him regress to desperation.

As such, this film doesn’t concern itself with much in the way of character development – not in the way you’d expect.  In its place are a series of reveals which either move the plot along or unnerve the audience (occasionally both).  A Brilliant Monster puts you into a dark room and flips light switches on one-by-one.  By the time you realize what’s in front of you, the story’s moved on, and you’re in a different room.

What’s revealed early-on to the viewer, beyond (and because of) what’s conveyed through the primary plot line, is that there’s a lack of a true B story balancing out the suspense and unease of the main story line.  This places the onus on the acting to shoulder the load of the film, where the leads don’t disappoint.  Dennis Friebe’s portrayal of Mitch as a man attempting to protect the division between his private and personal lives is admirable, as is Nick Leali’s performance as Mitch’s closest friend and undying source of support.  Joy Kigin’s Abby, a detective hellbent on prosecuting Mitch, capably serves as a second protagonist, and through her and Mitch’s perspectives. A Brilliant Monster presents a game of cat-and-mouse that supporters of Rabbath’s previous work will fawn over.  In particular, there are a few sequences which are simply masterful in their manipulation of the passage of time and cross-cutting.

The film is not perfect.  Some of the cinematography and sound design are slightly discombobulated. Certain parts of the film are unnecessarily unfocused, both in visual clarity and in narrative.  There are threads which do not tie up, credentials which are spoken when they could easily have been shown, and instances of rather heavy-handed dialogue.  However, fans of Rabbath’s work, are sure to enjoy the film.

Even though he may have some work to do, Rabbath has clearly found himself a niche.  He rarely strays from fabricating tales of human plight and the darkness found within us, but he makes them with such aplomb.  Anyone with an interest in tales of morality and retribution will find A Brilliant Monster a promising debut feature.

Visit the IMDB page for full info on cast and crew. A Brilliant Monster